Schooley's Mountain?  Is that in New Jersey?

No matter where we go, we are often asked that question!  And it seems, that no matter how much someone knows about New Jersey, they don't seem to be familiar with Schooley's Mountain!

Aside from the plethora of medicinal botanicals located in this northwest corner of Morris County, Schooley's Mountain was known for it's healing streams and was a resort and spa location back in the early 1800's!

Even Henriette mentions Schooley's Mountain as one of the Aquae Minerales, or Mineral Waters - also known as Medicinal Waters - on her renowned Henriette's Herbal website.   See the notation under II. CHALYBEATE WATERS (Ferruginous Waters)  http://www.henriettes-herb.com/eclectic/kings/aqua-mine.html.

Known alternately as chalybeate or ferruginous waters, or salts of iron, the mineral content of the Schooley's Mountain springs were acclaimed for their healing powers, first by the Lenape and then by European settlers.

Visitors seeking the waters' restorative powers first stayed on the site in tents. The history is somewhat cloudy, but from what I have been able to find, by 1815 the springs were well known to be the purest of their kind in the nation, drawing health-minded devotees from all over. 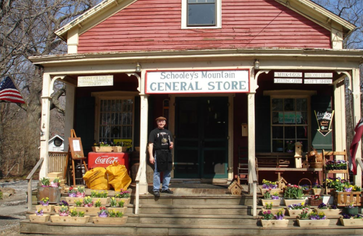 ...We are proud to say that Schooley's Mountain is home to the Schooley’s Mountain General Store, and is one of the oldest continuously run general stores in America, and THE oldest in New Jersey.


Read more about the history of our General Store here.